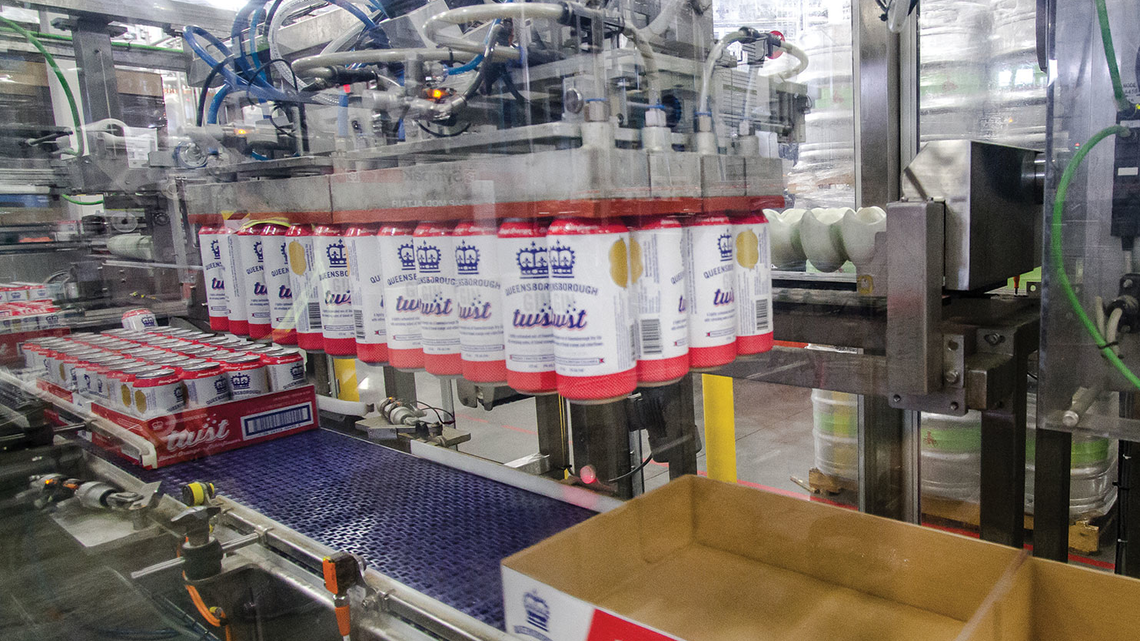 Explores the automation decisions and history of Canadian based brewery which has been growing steadily since 2008, expanding their production over 10 fold from 7,000 hectoliters to 100,000 in their new facility. Gain insight on the expansion process and the key factors considered by Central City in their approach to automation strategy and equipment selection. 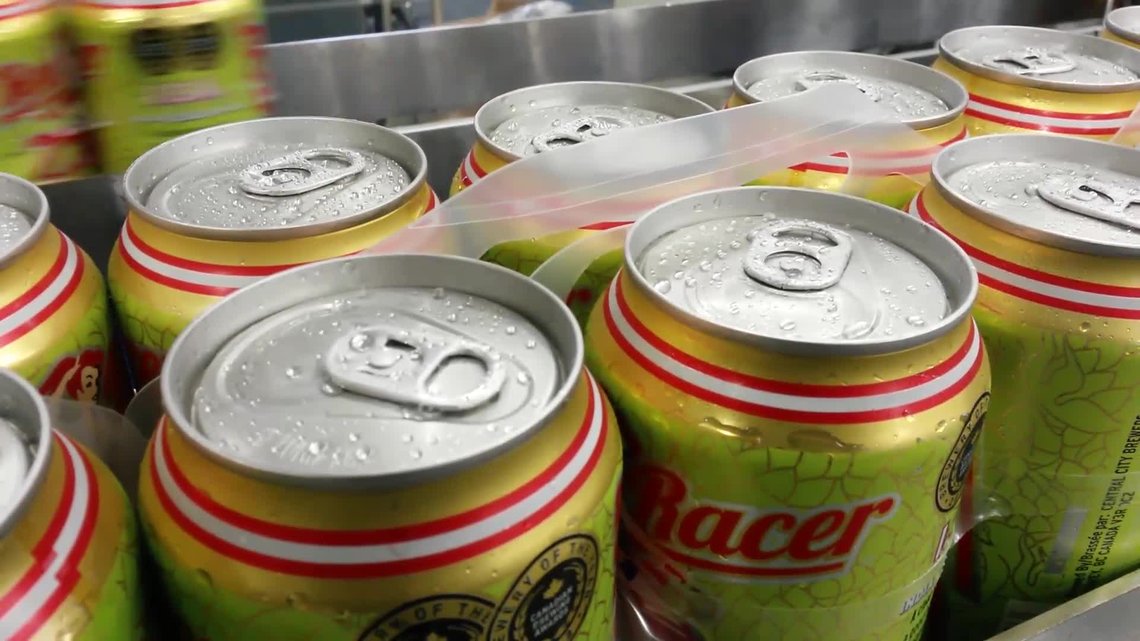 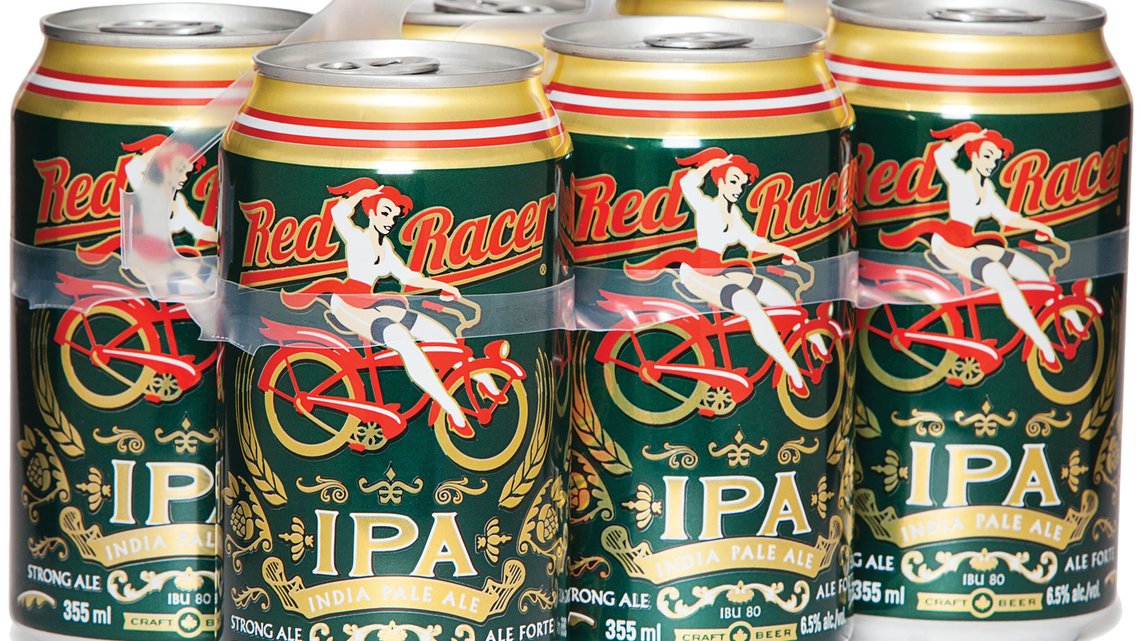 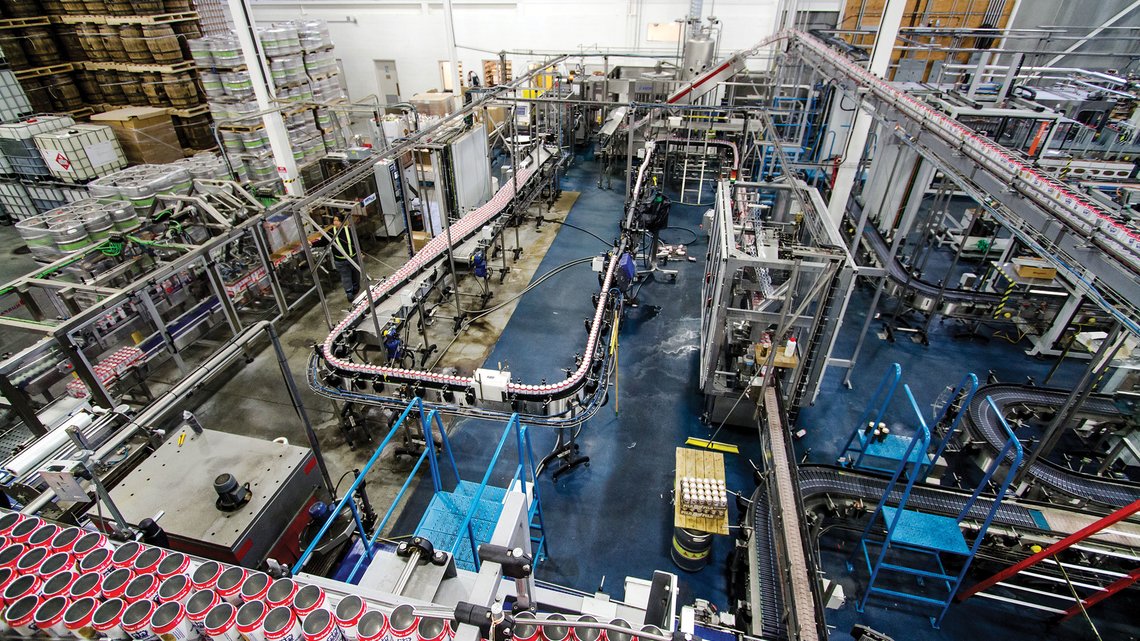 “By 2008, we added our first canning line. We were brewing on a little 3-vessel NSI brewhouse, three shifts a day,” says Tristan Warren, Operations Manager at Central City. “That site took us to about 7,000 hectoliters of annual production. We were quite real estate-constrained there. We essentially couldn’t put in any more tanks to make any more beer. So by 2011, we started planning for the current production site, opened in 2013, which has a 60,000 sq ft. footprint and an ultimate plant capacity of about 100,000 hectoliters of beer. And we’ve also diversified to a number of other beverage categories since moving to this site.”

With that, the company successfully made the order-of-magnitude jump from brewpub that happens to sell beer in retail channels, to brewery and distillery that happens to have its own brewpubs. Far from incremental growth, the company went from its existing 60 can/min Sympak (now part of CFT Group) machine to a full turn-key Krones line with primarily Kosme equipment. The filler is still maxed at 240 cans/min, but subsequent improvements/automation have seen the line efficiency increase from 60% with hand-packing to closer to 80% with recent machinery upgrades.

“We missed most of the summer that year and took occupancy in late summer with some construction delays, which seem to be the rule, not the exception, in my experience,” Warren says. “That first year, we did about 13,000 hectoliters. Even in a half year, we managed to double our volume from where we were capped at the original production site. We’ve grown about sevenfold since we’ve moved to this production site, and we continue to grow every year. We’re about 60% of land capacity for this brewery now, and we’ll fill that out over the next five years.”

The zero-to-sixty automation jump isn’t typical, but it worked for Central City. Out of necessity, many breweries have taken an ad hoc approach to building a brewery, having to move every year or swap out for higher capacity equipment every six months.

“With the forward-thinking nature of our founder and management team we purchased equipment that we thought we would need in the future beyond opening our flagship facility, as opposed to what we needed at that moment,” says Dustan Sept, Marketing Manager. “It was a much more sophisticated line than we were ready for, but we grew into it.”

When the 2013 facility opened, Central City was still BC-focused with some early success in Alberta, Manitoba, and Ontario. The company also dabbled a little bit in the U.S. But as of the end of 2017, the company had gone national in Canada. It recently completed a cross-pollination project called Across the Nation Collaboration, where it partnered with a different brewery in every province and territory for Canada’s 150th birthday.

“That was actually the first project we ever did that was sold all across Canada. As far as I know, no one has actually done that here, from a craft beer perspective,” Sept says. “We are the most national-scale craft brewery in Canada. As we grow, we strive to be Canada’s local craft brewery, beyond just B.C.”

Canning line
Central City is primarily a canned beer company, and formats include the North American standard 355-mL (12-oz), the American pint 473-mL (16-oz), and international standard 500-mL sizes. The primary canning line, originally put together by Krones in 2013, has been improved upon more than once over the last four years.

In its current iteration, empty cans are unloaded and single-filed by an FMT DH4A elevated automatic depalletizer and are conveyed by FMT rope conveyor to a twist rinser before filling in a 28-head Krones filler and sealing in a five-head Ferrum F505 seamer.

“Recently, we implemented a sterile-water recovery system that allows us to reuse the water from the first internal can rinse for the second rinse, after the can has been filled and sealed,” Warren says. “That wasn’t part of the original Krones design, but it was something we put in to reduce our water consumption. In our case, it’s just sterile, filtered water. We don’t use ozone or any sort of sterilant.”

Cans are inverted, air bladed, and coded on a Videojet 1550 date coder. After rinsing, a large portion of filled and sealed cans are conveyed on Kosme conveyors through a Hi-Cone 5301, where they are bundled into six-pack carriers. Thereafter, they are packed into formed trays, an operation that has recently experienced an automation bump.

When the facility first opened in 2013, almost all cans were bundled into six packs. The 240 can/min filler equals 40 six-packs/min, or 10 trays/min. A couple of hard-working operators could keep up with the line by hand-forming trays and hand-packing.

“But since then, we’ve seen a significant shift in our package formats, away from six-packs. We do a lot more single-serve product now,” Warren says. “That means we produce 24 loose cans in a shrink-wrapped tray. And we also do a lot of mix packs where we aren’t producing a finished product here. We produce basically 24 cans in a blank tray that goes to our offsite warehousing for assembly into mix packs. Regardless, you can imagine operators’ difficulty in trying to pick up loose cans and stuff them into a tray at a 240/min clip.”

That quickly became untenable. The first expansion from the original scope was the 2015 addition of a Wexxar tray erector. It was easy to justify from a payback perspective, because with machine-formed trays, Central City was using 10 to 15% less material. With the corrugated savings alone, the machine had a 30-month payback. Labor savings lowered ROI to less than two years.

“This helped a lot, but even the formed trays required hand packing,” Warren says. “It very soon became evident that we needed to improve how we were packing.”

“The benefits from the investment were in tying it all together; the robotic top loader, the conveyors and controls, and offline equipment,” Warren says. “Now that can line runs with one to two operators, whereas before when we were hand-packing, particularly with single cans, it was as many as five people manning it. Tying it all together inline and integrating pieces of standalone equipment like the tray erector made a whole lot of sense fiscally, largely based on reduction in the labor we’d need to run the line. Also, an intangible is that it’s definitely a morale-booster. You can imagine hand-packing cold filled beer cans in the middle of winter. The packaging operators certainly benefited from the improved work conditions.”

A key to the top loader is its ability to handle both bundled packs and loose cans. Recipe-based changeovers on the machine are governed by format (cans in carriers versus loose cans), and can height (355-mL versus 473-mL). For cans in carriers, a servo-driven diverter screw worm will pack one lane, and then swing over, pack the next lane, and repeat. Meanwhile, it keeps two lanes filled with loose cans. It’s just like an overflow function; it’ll feed one lane, and when that’s full, cans flow into the next lane.

“And then there’s one change-part—essentially a dead plate, that covers the diverter screw when it’s not in use,” Warren says. “There are only two mechanical change parts to switch between six-pack or four-pack bundles, and unbundled singles.”

Also of note, the robotic top loader uses vacuum grippers to handle all formats, but the cans come in wet after rinsing. Nuspark came up with a silicon foam compound solution at the end effector to be able to handle the wet cans.

Another piece of standalone equipment from the original build that was brought online amid the recent improvements was a Sympak shrink wrapper and heat tunnel. Bundled six packs don’t require shrink wrap, and flow directly through the now online equipment. But taking trays of loose cans that did require bundling offline for shrink-wrapping, then back online for palletizing, was awkward at best.

“There was some hand-palletizing for shrink-wrapped product before that was brought in-line,” Warren says. “Effectively, we would make pallets of un-shrink-wrapped trays on the packaging line. Those would then go offline to be depalletized, run manually through a shrink tunnel, and then re-palletized. That was the extent of the hand-palletizing. As we started to do more and more of that format, more shrink-wrapped trays, it became evident that it would make a whole lot more sense to bring that inline.”

The current line ends with Kosme conveyance through the original 2013 Kosme palletizer, prior to product being ultimately discharged.

What’s next
For a fast-growing brewery going from 60 to 240 cans/min, five years is a great run for a single facility. But as Warren mentioned, it’s finally starting to feel constrained. The company is converting some storage space to packaging as a temporary fix, but the writing was on the wall for further expansion.

“We’re actually getting ready to break ground on a second building right next door,” Sept says. “Again, in being forward-looking, we as an organization purchased the land next to us shortly after we built this facility in 2013. As we continue to grow and get closer to capacity in our current facility, we’ll be able to grow into that next space within the next couple of years. From a packaging perspective, we’re pretty much maxed out for space right now.”

As product format and SKU selection has drifted away from strictly bundled cans toward more of a plurality of Hi-Cone bundles and paperboard cartons, Warren expects cartoning and carton erecting equipment to be part of any new lines in the new facility.

“We do more and more closed boxes for cans, so paperboard boxes of mostly 12-packs, 15-packs of loose cans in a sealed box,” Warren says. “That’s all done by hand now, so when we open our new facility we’ll be able to expand the existing packaging line to be able to do that inline. And as always, there’s some additional packaging opportunities that come with essential expansion. Just like our first expansion, we’re preparing for where we plan to be in a few years, not just for our immediate needs.”